The third best march in the history of the port Autority in terms of freight traffic.

The companies operating at the docks of Ferrol and San Cibrao moved 9.9% more goods last month than in March 2017.

The institution recovers the path of growth, achieving its strategic objective of registering one million tonnes a month.

The loading and unloading of bulk solids rises by almost 15% and more than compensates for the fall in bulk liquids.

Ferrol, on the 18th of April 2018. Last month the companies operating in the facilities of the Port Authority of Ferrol-San Cibrao moved slightly more than 1.3 million tonnes; 9.9% more than last year during the same period. In terms of freight traffic, this figure makes March 2018 the third best March in the history of the institution, after March 2014 and almost at the same level as March 2012, as it is shown in the graph illustrating this information.

This great March, which is to date followed by a good April, has allowed the Port Authority of Ferrol-San Cibrao to recover the path of growth, which was temporarily lost during the two first months of this year. During the months of January and February 2018, the movement of freight was lower than the movement in 2017 in a daily average of 13,750 tonnes.

Thanks to the recovery started in March, the final data of Puertos del Estado will certify that the Port Authority of Ferrol-San Cibrao has managed to close the first trimester of 2018 with some 3,025,000 tonnes loaded and unloaded. Therefore, the institution once again achieves its strategic objective of registering one million tonnes per month. With this achievement, this Port Authority becomes established as one of the top four port authorities of the North Atlantic-Cantabrian facade, together with the port authorities of Bilbao, Gijón and A Coruña. 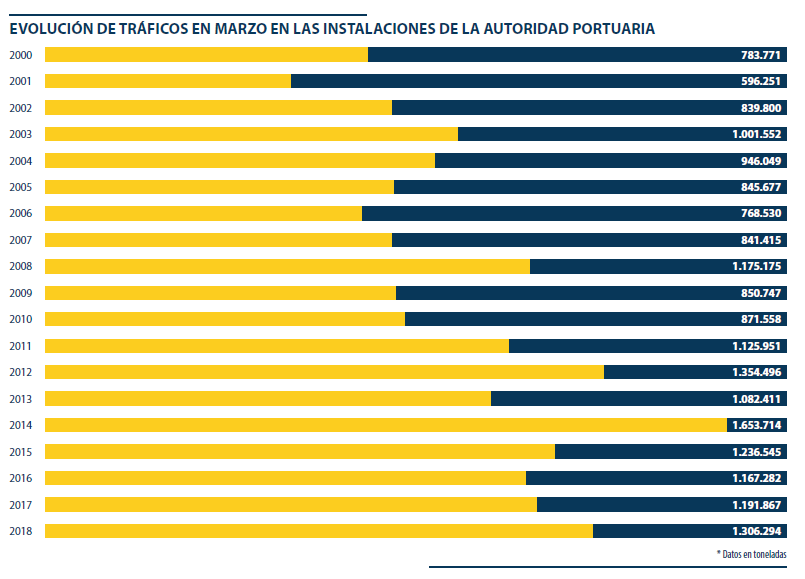