THE PORT AUTHORITY CLOSES THE FIRST QUARTER OF 2019 WITH MORE THAN 3.5 MILLION TONS MOVED IN ITS DOCKS

The activity in the ports of Ferrol and San Cibrao has increased at the start of this year by 16.1% compared to 2018. Experts warn, however, of a very likely sharp deceleration of the market over the coming months.

Coal and bauxite lead the traffic growth recorded between January 1 and March 31.

The Port Authority of Ferrol-San Cibrao has closed the first quarter of 2019 registering a transit of raw materials, materials and products slightly higher than three and a half million tons in its facilities. This year’s start is on the podium of the best in the history of the institution. However, analysts in the sector agree to warn of a very likely sudden slowdown in the market in the coming months.

The companies that operate in the docks of Ferrol and San Cibrao moved a total of 3,508,794 tons of goods from January 1 to March 31 – according to what is still provisional data.

As shown in the graph below, this figure is 21% higher than the average activity of the last three decades and represents an advance of 16.14 percentage points over the same period of 2018. In fact, this start of the year almost equals those of 2014 and 2012 in the historical series, staying below the mark recorded in 2017 and comfortably exceeding all others.

With this balance, the Port Authority successfully meets the objective set in its strategic planning: to accumulate a monthly average of one million tons moved through in its docks. With this, it consolidates its position among the four main institutions of its class in the North Atlantic-Cantabrian seaboard, together with those of Bilbao, Gijón and A Coruña.

“We have faced a good quarter, much better than that registered at the start of last year. But we must be extremely cautious about the forecast for coming months. What all analysts are telling us is that in the short term a deceleration is likely to follow.” said the president of the Port Authority, José Manuel Vilariño. 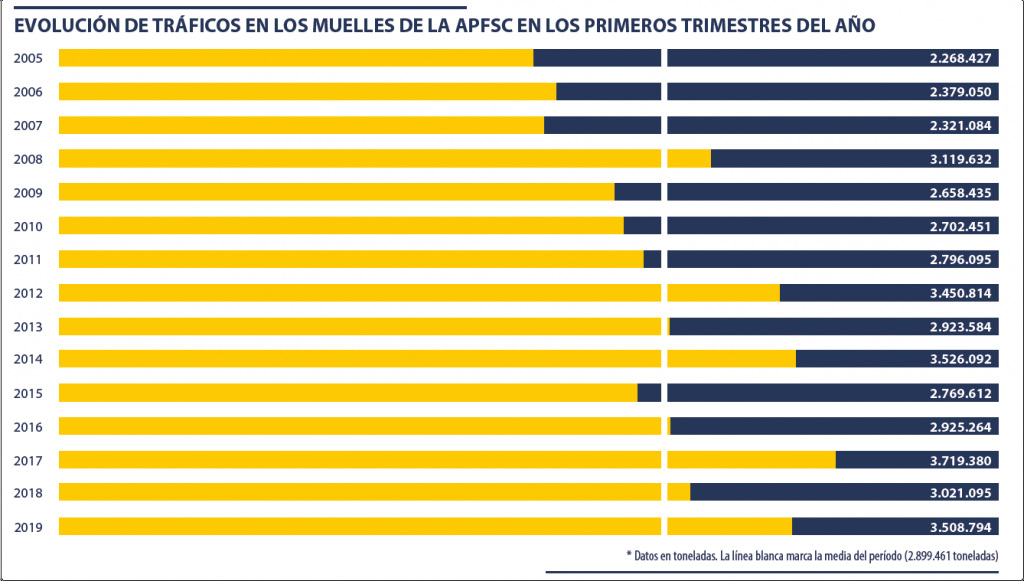