The outer dock has been included in a freight route with direct connections to Rotterdam, Tilbury, Seville and Huelva, as well as indirect connections with Morocco, Cartagena, the Canary Islands, Scandinavia, Russia and the Baltic countries.

The concession of Yilport in Caneliñas will receive two large container ships every Saturday from now on.

Ferrol has been included in the major routes of maritime traffic of containers. Tonight the 129.6-metre-long vessel JRS Capella with a capacity of 698 TEUs, which travels from Huelva to Tilbury (in the south east of England) plans to call at the outer harbour, where it is expected to load and unload of containers. This is one of the greatest strategic bets of the Port Authority of Ferrol-San Cibrao, which will thus obtain valuable new traffic.

The container terminal of Caneliñas, a concession of Yilport Ferrol, has become one of the regular routes of the shipping company MacAndrews. The two ships operating the new route Tilbury-Rotterdam-Ferrol-Seville-Cartagena-Huelva-Ferrol-Tilbury-Rotterdam will now arrive in Ferrol every Saturday. Caneliñas will have direct weekly connections with Seville and Tilbury (outbound transit) and with Huelva and Rotterdam in Holland (inbound transit). Ferrol will also be connected with Scandinavia, Russia, the Baltic countries, the Canary Islands and Morocco thanks to the connections of MacAndrews in Rotterdam (the largest harbour in Europe), Tilbury and Seville.

With this line, which will mean an economic boost for the area, the Galician industry will be able to import and export goods through this container terminal, with the best depth of water in the Atlantic coast in the South of Europe.

Yilport Ferrol, the concessionaire of the terminal, belongs to Yildirim Group, one of the most relevant container operators in the world. The regular route which will start today is operated by one of the oldest shipping companies in Europe: MacAndrews, which belongs to the CMA-CGM group. The Xunta (Galician Government), through XesGalicia, granted a loan of 8.4 million euros to the concessionaire, in order to favour its activity at the container terminal of the harbour of Ferrol.

Over one million tonnes a month

This new traffic will contribute to increase the activity in the facilities of the Port Authority of Ferrol-San Cibrao. According to still provisional data, the companies operating at these docks moved 5,213,217 tonnes of freight during the first five months of this year. This figure is well above the historical average of the institution, even though it is 7.6% lower than the amount reached for the same period in 2017. In any case, it manages to meet the strategic objective of the entity, which is a monthly average of one million tonnes. 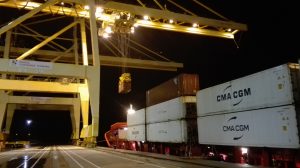