The vessel arrives in the city today and can be visited from tomorrow until Sunday from 10 a.m. to 9 p.m.

Built in 1991 with the same characteristics as the vessel which sailed around the world between 1519 and 1522, the ship will be docked at the pier of La Cortina during all its stay in the city.

The replica of the vessel Nao Victoria, the legendary ship that sailed all around the world from 1519 to 1522, is visiting Ferrol. The ship is due to dock at La Cortina today at 1 p.m, where it will remain until Sunday, the first of July.

Built in 1991 after intensive historical research, the vessel can be visited by anyone from tomorrow until Sunday from 10 a.m. to 9 p.m., according to the information provided by the ship’s foundation.

The 26-metre-long and 7-metre-wide vessel Nao Victoria has three spars, six sails and 290 square metres of sail area. Those who board the vessel will not only visit its four different decks made of pine and oak and admire its shapes and details but also learn about the lifestyle of the crew that managed to sail around the world five centuries ago.

The ship has been visited by over 593,000 people during its last four annual tours. In one of such tours, the vessel had already visited our city, from the 6th to the 8th of November 2015. Admission is free for children under five and is two euros for children from five to ten years old. The other single tickets will cost four euros. The family package (two adults and up to three children) is ten euros. 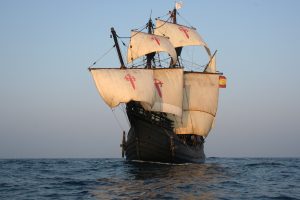