At this stage of the year, the institution has guaranteed the arrival of ships with a total capacity of almost 26,000 people.

The number of passenger ships received in 2019 will exceed that of 2018, when there were 14 ships that arrived at the docks of the naval city.

The Port Authority of Ferrol-San Cibrao has already closed an agreement with seven shipping companies to receive 17 cruise stops in the dock of Curuxeiras this year. In addition, it is negotiating with other companies in the sector several additional berths so that at the end of the year, this number is increased to reach around twenty passenger ships received. In any case, the figures this year will exceed the number of arrivals in 2018, when there were 14 ships of this type that stopped at the facilities of the institution, chaired by José Manuel Vilariño.

The new cruise season in Ferrol started on January 16th with the arrival of the Saga Pearl II. Without taking into account possible new additions to this list, the season will conclude on December 2nd with the brand-new Spirit of Discovery, which will carry out its inaugural navigation this summer. 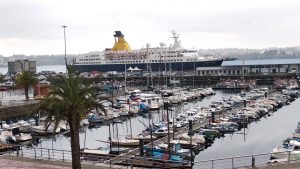 As reflected in the graph on page 3, different AIDAmar visits will take place in February and November; visits of the Georg Stage, in April; of the Hamburg, in the same month; of the Star Breeze, in May and in October; of Amadea and Aurora, both also in May; visits of the Star Pride, in June; from Oriana, in July; of el Marina, in September; of Artania, in October; of AIDAbella, in the same month; and, again, both the Saga Pearl II and the Spirit of Discovery, respectively, in April and November.

The Georg Stage works as a school ship of the Danish civilian navy. The remaining ships belong to the fleets of Saga Cruises, AIDA, Plantours Kreuzfahrten, Windstar Cruises, Phoenix Reisen, P&O Cruises and Oceania Cruises. Currently, the Port Authority is holding advanced talks with two other shipping companies so that some of their ships can dock again in Ferrol throughout 2019.

Coming from Santander and bound for the island of Guernsey in the English Channel, the largest of the passenger ships is the Oriana with a length of 281 meters – practically 2.7 times the length of the football field of A Malata.  With its 54 meters, the Georg Stage is the smallest.

With these 17 berths already agreed, the institution has guaranteed the arrival of ships in Ferrol with a combined capacity for 25,870 people (18,775 customers plus 7,095 crew members), which will be an important source of income for the city. 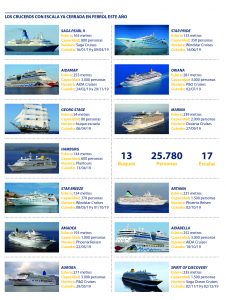