The institution has managed to close the period January-September with one of the four best results in its history.

The loading and unloading operations recorded in the docks of the entity during the current year are 10.6% above the average in the last fifteen years.

The solid bulks lead the activity with a market share close to 79% in the ports of Ferrol and San Cibrao.

The Port Authority of Ferrol-San Cibrao faces the last quarter of 2018 with the expectation of easily surpassing the 12 million tons of goods moved in its facilities this year. If this estimate is confirmed, the entity will have fulfilled the objectives indicated in its strategic programming. Consequently, it will be consolidated among the first four Port Authorities of the North-Atlantic-Cantabrian seaboard, together with those of Bilbao, Gijón and A Coruña.

This projection is based on a short-term market analysis and also on what happened in the Ferrol and San Cibrao docks during the first three quarters of this year. According to what is still provisional data, the companies that operate in these docks moved 9,930,320 tons of goods in that period of time. Never in the history of the institution had such a figure been reached at this point of the year – barring the exceptions of 2012 (10,412,923), 2017 (10,228,387) and 2008 (9,939,697).

The entity has reached October in a good position despite having been impacted by clearly negative numbers in January, February and September. On a positive note, it achieved a historic progress of 40.8% in April; in June, that of 23.9%; and in July, another 35.7%. In March, May and August, much smoother single-digit fluctuations occurred – between -7.7% and + 9.9%.

With a market share close to 79%, it is the solid bulk segment that is currently pushing the port economy forward: in the first nine months of 2018, 7,836,217.76 tones of goods of this type were loaded and unloaded – practically the same figures as in 2017.

In relative terms, however, the best behavior is to be found in another market: that of containers, with an advance of 1,436 percentage points in the first three quarters of 2017 and 2018. These figures come as a result of the opening of a new regular line of the shipping company MacAndrews in the outer port of Ferrol, the loaded and unloaded tons within this item progressed from 1,526.46 to 23,456.78. 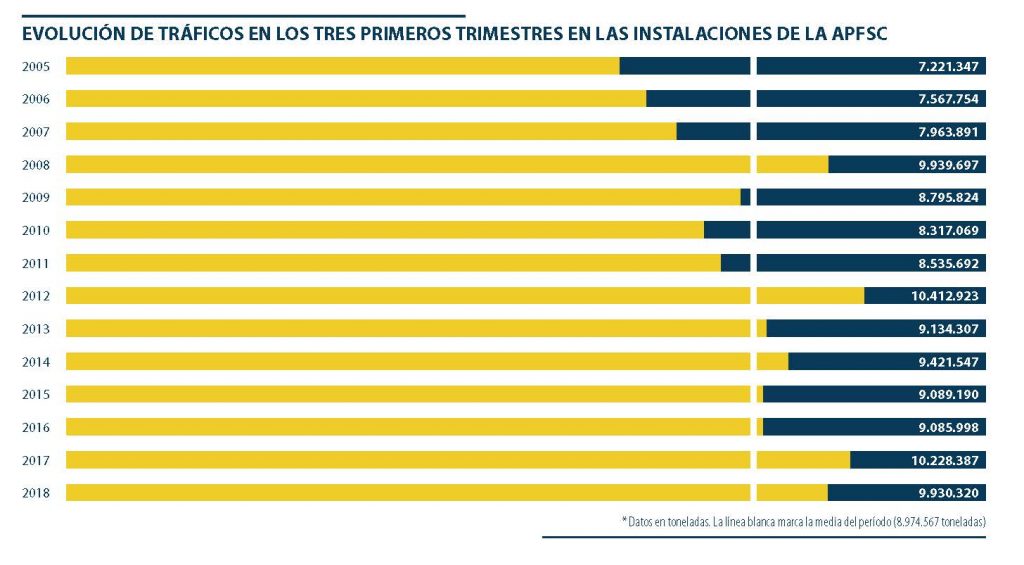