The institution achieves its strategic objective of scoring a monthly average of one million tons transported.

Oils, scrap, wood and caustic soda lessened the impact of the reduction in other significant traffic.

The companies that operate in the docks of Ferrol and San Cibrao are moving 6.2% less goods this year than in the past.

The Port Authority of Ferrol-San Cibrao has just passed the equator of the year having fulfilled its strategic objective of recording a monthly average of one million tons transported in its facilities. However, the activity balance for the first semester of 2019 reflects a moderate decline compared to that of 2018. This decline is slight in comparison with the average activity of this decade. In the top 10 of the traffic movements, not in vain, only four of them alleviate the situation of a generalized fall that had already been foreseen.

According to what is still provisional data, the companies that operate in the docks of Ferrol and San Cibrao moved between the 1st of January and the 30th of June of this year 6,122,978 tons of goods. The decrease in relation to the same period of the previous year is 6.2%. Setting the scope from 2010 until now, the fall remains at 1.3 percentage points.

These results highlight a general contraction in the markets, with regressions of 4.4 percentage points in the solid bulk segment, of 13.5 in the liquid segment and of 7.9 in the general goods segment. Residual business niches also suffer: fishing, provisioning, transshipments and internal movements. The ports of Ferrol and San Cibrao are affected by the strong process of energy transition that Europe is experiencing.

Among larger traffics, in relative terms, only oils, wood, caustic soda and scrap have significant evolutions, with rises of 16.4, 6.9, 6 and 5.9%, respectively.

In the rest of the breakdown of the loading and unloading operations, magnesite and board are worth mentioning, with spikes of 34.4 and 61.9 percentage points, and, above all, containers, with an advance of 831.7% if it is measured in tons and 561.1% if it is estimated in TEUs.
Semester figures also show a decline in the cruise market (-19.3%), in this case attributable mainly to cancellations of stopovers due to bad weather.
Lastly, the number of large vessels arriving in Ferrol and San Cibrao decreased: 534 in the first half of 2019 compared to 574 in the initial of 2018.
“It is true that we continue to fulfill our strategic objective of activity, but it is also true that we are already beginning to pay for the sudden slowdown in the market we had predicted,” says Port Authority President José Manuel Vilariño, adding: “We continue, all in all, keeping a consolidated position between the four main ports of the North Atlantic-Cantabrian seaboard, together with those of Bilbao, Gijón and A Coruña “. 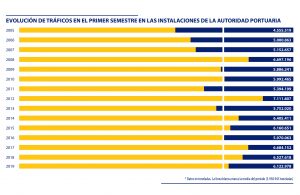