The diplomat’s tour of the facilities is an endorsement of the project that the Turkish group Yildirim is currently developing in the Outer Port. This project represents the largest investment of this country in Galicia.

The new ambassador of Turkey in Spain, Cihad Erginay, visited the container terminal of the Outer Port of Ferrol early this afternoon. In its tour of the facilities,  he was accompanied – among others – by the general manager of the terminal, Diogo Castro; the president of the Port Authority of Ferrol-San Cibrao, José Manuel Vilariño; the director, Alejandro Rey; and the head of its Commercial and Development Department, Julio Hernández.  The facilities are operated by the Turkish company Yildirim through its port division known as Yilport.

This visit is part of the round of contacts that the Turkish diplomat is carrying out after recently taking office as ambassador in Spain. The visit is also an endorsement to what represents the largest investment of a company from Turkey in Galicia. From the beginning of its operations in June 2018 until the end of last year, the container terminal generated a freight traffic of 43,194 tons (4,532 TEUs). 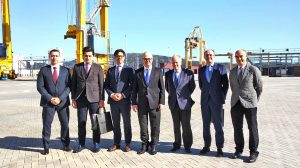