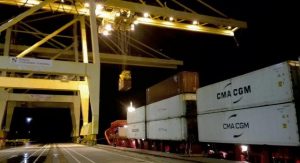 The companies that operate in the ports of Ferrol and San Cibrao close 2018 with a movement of 13.68 million tons of goods.

In December, the institution surpassed the amount of loading and unloading operations registered in 2017 after a spectacular year of activity.

The good behavior of solid bulk traffic compensates for the slight decline experienced in the liquid bulk market.

The Port Authority of Ferrol-San Cibrao has just closed the second best year in its history after registering a volume of traffic of raw materials, goods and products close to 13.7 million tons in its facilities during 2018. The good behavior of solid bulk traffic has compensated for the slight decline experienced in the liquids and general goods market. This concludes a year marked also by the opening of the first regular line of ships and the progress made in the works to provide the outer port of Caneliñas with a railway access. 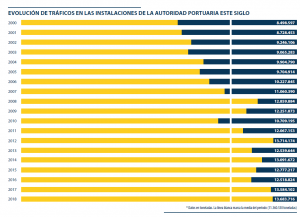 The companies that operate in the docks of Ferrol and San Cibrao moved a total of 13,683,716 tons of goods in 2018 – according to what is still provisional data. As shown in the graph below this figure is 20.4% higher than the average activity of the present century and it represents an advance of 0.7% compared to 2017. In fact, it is only 0.2 percentage points below the absolute record of 2012.

With this balance, the Port Authority successfully meets the objective set in its strategic planning: to accumulate a monthly average of one million tons transported in its docks. With this, it consolidates its position among the four main institutions of its kind on North-Atlantic-Cantabric seaboard, together with those of Bilbao, Gijón and A Coruña. 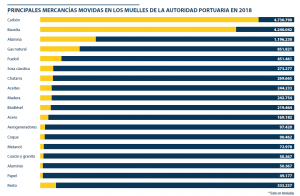 Analysts had predicted a slowdown for the final two months of the year that has not been confirmed in the end. This success was due to the favorable evolution of the solid bulk segment: between 2017 and 2018 the loads and unloads went from 10.45 to 10.75 million tons; that is, they increased by 2.8%. In contrast, the movement of general goods fell with a drop of 3.3 percentage points and above all, that of liquid bulk, with a reduction of 6.6%. The tons in provisioning advanced from 20,265 to 27,930.

The leaders were Coal and Bauxite

Breaking down the statistics, mention should also be made of the movements of fertilizers, with a recovery of 148.4% and of equipment, tools and spare parts, with a growth close to 17 percentage points.

The importance of containers

Also, the available data reflect the specific weight that container traffic is acquiring. Thanks to the entry into service of the new regular line of the shipping company MacAndrews last June 2 in the outer port of Ferrol, the count of loaded and unloaded tons inside containers in 2018 registered an amount of (42,593). This figure multiplies by 19 the one registered in 2017 (2,235). Measured in TEUs, the progression has been from 455 to 4,390.

The figures gathered also show that 2018 was a good year for the cruise market, with practically the same number of passengers received compared to 2017, despite the cancellations of stopovers due to bad weather: 27,708 compared to 30,049. The numbers, finally, reveal an increase of 2.7 percentage points in the traffic of ships: 1,150 compared to 1,120 of the previous year.

Rounding off, one of every two large ships received at the docks of Ferrol and San Cibrao was of general cargo.

“They are very good numbers in general terms. The balance cannot be more positive. We are very pleased to be able to contribute to the revitalization of the economy in the areas of influence of Ferrol and A Mariña “, emphasizes the president of the Port Authority in reference to the activity registered in 2018. With his eyes set on the future, José Manuel Vilariño adds: “Our main challenge is the diversification of traffic. We have been working on this line for years, opening up to agroforestry, ro-ro traffic, containers, construction materials … We want to go from being a very solid-bulk-oriented port to a port with a greater volume of general goods and of products with the highest added value, without neglecting our support for traditional sectors such as the energetic, the metallurgical and the naval, which have the utmost importance for the area. The entry into service of the container terminal of the outer port is an example of the result of this policy.

[…] In addition, with the new Panama Canal, traffic in the Atlantic Ocean is gaining more importance with respect to the Pacific Ocean. Our hope is to be able to capture part of this new maritime-economic activity “.

Referring to what happened in the recently completed year, Vilariño also highlights the progress made in the construction of the railway access to Caneliñas, which since September 2017 has been executed by a temporary union of companies for 72.5 million euros plus VAT. Notably, 1.3 of the projected 5.5 kilometers in length has already been excavated in the future tunnel of entrance to the outer port.

The rate at which the works are being developed is in accordance with the schedule set for this operation, which foresees the start of operation of the line by 2021. Currently there are 75 workers working directly in this structure which is vital for the development of the full potential of the dock of Caneliñas.