This regular service will connect Galicia with the UK and the north of Europe through the shipping company’s extensive network of harbours.

The company will also offer a connection with the Canary Islands for Galician loaders.

This is a new milestone for the Harbour of Ferrol, which aims to become a commercial point of reference in the north of the peninsula. The shipping company MacAndrews, one of the main operators in the intra-European traffic of containers, will start to operate at the container terminal Yilport Ferrol with a weekly line.

After first having called at the container terminal in April 2017, the company has eventually decided to opt for the Harbour of Ferrol and started to operate one regular line calling at the terminal twice a week. One line, towards the north, will connect Galicia with the United Kingdom and the North of Europe through MacAndrews’ extensive network of harbours. The second line, towards the South, will provide the Galician loaders with a regular connection with the Canary Islands.

The implementation of this new line for the traffic of containers will be an important economic boost for Galicia as it will mean a great competitive advantage for all the industry of the North of Galicia. This new service by MacAndrews will impulse not only the exports but also the imports of goods, by improving significantly on the transit times and by reducing the costs of land transport.

The Port Authority of Ferrol-San Cibrao bets mainly on the traffic of containers with regard to the outer harbour. That bet has now been reinforced by the arrival of the company MacAndrews, which belongs to the CMA-CGM group. This shipping company, one of the oldest in Europe, is one of the main intra-European operators of maritime traffic of containers and CMA-CGM is the third group in the world.

For its part, Yilport Ferrol is the concessionaire of Ferrol Container Terminal, one of the most relevant in Atlantic Europe. This is a subsidiary of the Turkish industrial giant Yildirim Group, which is among the main container operators in the world. 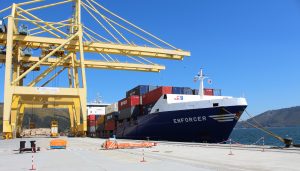