AT THE EQUATOR OF THE YEAR, THE PORT AUTHORITY HAS ALREADY MOVED OVER 6.5 MILLION TONNES IN ITS FACILITIES.

At the equator of the year, the Port Authority of Ferrol-San Cibrao has already moved over 6.5 million tonnes in its facilities; managing to do something that they had only achieved three times in all its history. After the bad start of the year, there has been an increase in the activity and, therefore, the institution is already on the point of recovering the path of growth in 2018. Furthermore, the annual balance is once again in the black and the entity achieves its strategic objective of registering a monthly average of one million tonnes again.

The entity has finished the first half of the year in this good position, despite its negative start of the year when it experienced falls in activity in January and February of 35.6% and 28.1%, respectively. On the other hand, the institution achieved a historic increase of 40.9% in March and 23.9% in June, whereas minor, single-digit fluctuations occurred in March and May.

The sector of solid bulks is currently revitalizing the economy of the harbour: the loads and unloads increased from 5.06 million tonnes in the first six months of 2017 to 5.11 million tonnes in the same months in 2018, that is, they increased by 0.9%. On the contrary, the movement of general freight fell by 1.7% and, above all, there has been a specially important decrease in liquid bulk traffic, with a drop of 17.5%. The tonnes of supply goods increased from 6,125 to 9,873. 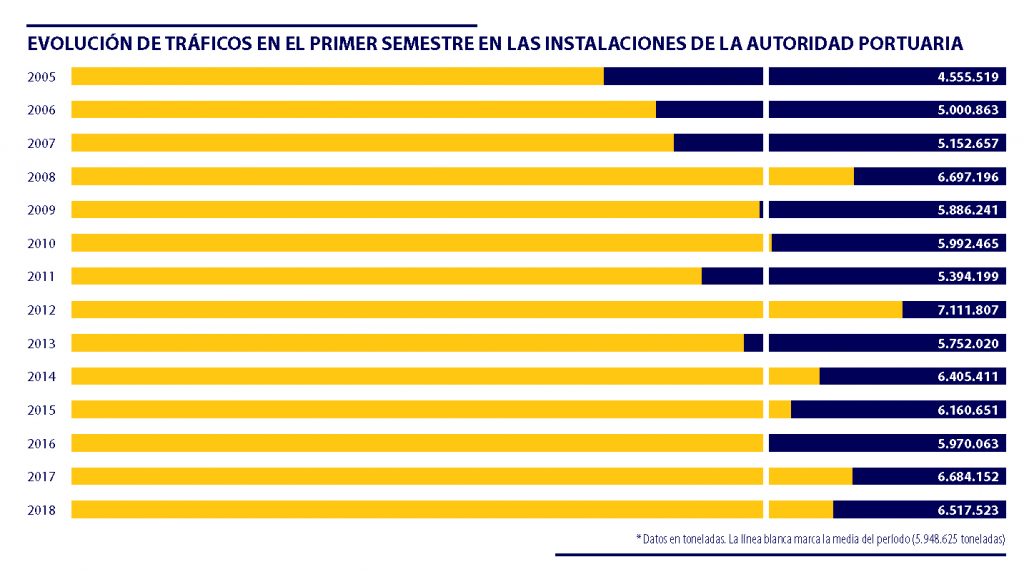 Bauxite and coal, the leaders.

In terms of large traffics, alumina, LNG and bio-diesel performed best in relative terms, with increases of 12.8%, 5.9% and 3.7% respectively. With regard to the rest of loads and unloads, the movements of quartz and granite also deserve a special mention, which have gone from zero to 55,056 tonnes; as well as methanol, with an increase of 55.7% (from 27,197 to 42,361 tonnes).

The performance of fishing must also be highlighted in the balance of the first half of the year as 142,92 tonnes of this product passed through the facilities of the Port Authority from January to June 2018, compared to 101,72 tonnes registered in the same period in 2017. The catches of crustaceans fell from 7,89 to 3,18 tonnes and fish decreased from 9.06 to 7 tonnes, while mollusks skyrocketed by 56.6%; with a total of 132.75 tonnes with an approximate cost of 790,000 euros.

Likewise, all available data strongly suggest that the traffic of containers will be important in the immediate future of the institution. Thanks to the start of the new regular line of the shipping company MacAndrews in the outer harbour of Ferrol the second of June, the number of tonnes in containers loaded and unloaded is 5,090 tonnes, which is at this time of the year more than four times higher than the figure registered at this time in 2017 (1,196 tonnes).

Good news in terms of passenger numbers as well. The number of cruise passengers arriving at the facilities of the Port Authority has increased from 6,504 in the first semester of 2017 to 8,398 in the same period in 2018, which means that this market is growing at a pace of 29,1 %.

Thanks to these figures, the Port Authority of Ferrol-San Cibrao has been able to close its last inter-annual balance (from July 2017 to June 2018) with 13.42 million tonnes, 1.4% more than its record for the previous 12 months. Therefore, the institution becomes established as one of the top four of its kind of the North Atlantic-Cantabrian facade, together with the port authorities of Bilbao, Gijón and A Coruña.