Unprecedented image so far at the outer harbour of Ferrol: four vessels carrying out simultaneous operations with bulk liquids, bulk solids and different general freight. This coincidence, result of the increasing development of the activity at these facilities, happened this morning.

The companies operating at the outer harbour of Ferrol loaded and unloaded 2,413,675 tonnes in the first semester of the year, a monthly average of more than 400,000 tonnes. 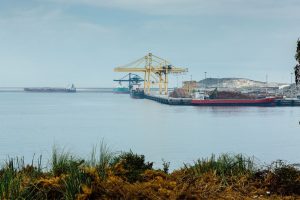