FERROL LAUNCHES A NEW REGULAR LINE OF CONTAINERS WITH THE WEST OF ENGLAND, IRELAND AND SCOTLAND

It will be operated weekly by the shipping company Containerships.

The Galician industry will be able to export and import to more markets from the Yilport terminal in Caneliñas, the largest on the South European Atlantic coast.

Ferrol will launch its second regular line of containers on Friday, which will link northern Galicia weekly with western England (Liverpool and Bristol), Scotland (Greenock) and Ireland (Dublin). This service managed by Containerships joins to another of the same shipping company which offers connections to British Tilbury, Rotterdam (Netherlands), Germany, Denmark, Finland, Poland, Sweden, Norway, Russia and the Baltic countries.

The Port Authority of Ferrol-San Cibrao thus takes a new step in its strategy of diversification and acquisition of high added value traffic. From Liverpool and bound for Bilbao, on the 5th it plans to reach the outer port the Encounter, the inaugural vessel of the second regular container route of the terminal operated by Yilport Ferrol under concession, which is the largest of the South European Atlantic coast.

This new line of goods contained in the dock of Caneliñas will allow the Galician industry to export and import to more markets reducing costs. Containerships considers this step as strategic for its development and consolidation in Galicia. Provides from Ferrol an excellent offer of short sea shipping with the United Kingdom and northern Europe. The company thus strives to give the production fabric more logistics and transport solutions, with tight and reliable transit times, that facilitate the reduction of emissions and the balance with the environment.

Belonging to the CMA-CGM megagroup, since its implementation in Ferrol, in June 2018, this shipping company (formerly MacAndrews) has moved 16,166 TEUs loaded with 176,257 tons, in a transit that has only grown steadily since its start. This year, despite the coronavirus crisis, it is rising to 13.7%, according to provisional data for the period January-May.

The new route will make it easier for this hike to continue, as well as opening up a range of possibilities for the companies in the area. “We are pleased to be able to offer the industry an increase in its competitiveness through our facilities. We thank both Containerships and Yilport for stepping up their commitment to Ferrol with this new route,” said Port A uthority president, José Manuel Vilariño. 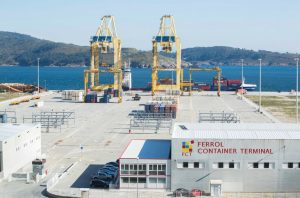