The Curuxeiras dock will welcome 46,109 visitors, a figure that, if materialized, would exceed the maximum of 39,017 that was reached in 2014.

The Shipowner TUI Cruises joins the list of those that usually offer Ferrol as one of their stops on their journeys in 2020.

Ferrol, 18th December 2019
The Ferrol-San Cibrao Port Authority has already closed 24 stops for next year, which would mean receiving 46,109 people – if all stops are completed – a figure above the maximum number of cruise passengers reached in 2014 with 39,017. In addition, a new Shipowner, TUI Cruises will join the group of those that already routinely offer the naval city as one of their stops on their journeys in 2020.

Although the success of all the stops negotiated by the Port Authority will depend largely on the weather conditions, this forecast places the institution headed by José Manuel Vilariño near tackling the challenge of reaching the number of 45,000 tourists that had been set for 2022. And it would double the data for 2019, which. Taking into account the last stops planned before the end of the year, it will leave 20,920 cruise passengers on the Curuxeiras dock, thus exceeding the 17,534 visitors that arrived in 2018.

Up to nine companies have included the naval city in their routes: AIDA Cruises, Saga, P&O, TUI (which opens this destination), Fred Olsen, Phoenix Reisen, Windstar, Seven Seas and Oceania. The new cruise season in Ferrol, as reflected in the graphic on page 3, will open at the end of February with the berthing of the AIDAmar, a 253-meter-long vessel with the capacity to accommodate 3,000 people, and it will close on November 1st with the arrival of the Albatross, which has two other stops planned in the estuary (May 20th and October 12th).
Among those who will repeat a stopover in Curuxeiras the next course, it is worth highlighting the Aurora with five planned dates. It will pass between the castles for the first time on April 13th, will return on 22nd and 27th of that same month, again on June 7th and concluding on August 13th its passage through Ferrol in 2020. The AIDAbella and the Wind Surf (with 187 meters of length, one of the largest sailing cruises in the world) will visit the port twice during this year. The first will be on May 10th and October 8th and the second on June 17th and August 25th.
As an anecdote, Ferrol will witness the entry into service of the Seven Seas Splendor, a cruise ship of the Seven Seas Cruises shipping company with 224 meters in length and an accommodation capacity between passengers and crew of 1292 people. 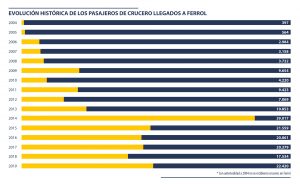 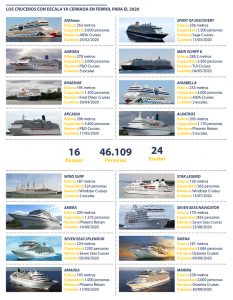