The entry into operation of this service will allow the capture of the traffic of goods of animal origin destined for human consumption that come from countries outside the European Union.
The facilities will become a growth opportunity for the container terminal and open business opportunities to companies in northern Galicia.

Ferrol, 10th October 2019
The European Commission has granted the Ferrol-San Cibrao Port Authority a Border Inspection Post (BIP). The decision of the institution opens up the possibility of capturing traffic in wrapped or packaged products of animal origin destined for human consumption that come from countries outside the European Union (usually fish and meat). The facilities of this post have already been built in the outer port of Ferrol and occupy an area of approximately 400 square meters and they meet all the requirements for authorized technicians to control this type of goods.
The Port Authority has been working for several years to achieve the favorable resolution of Brussels, since it is a fundamental service to guarantee the growth of the container terminal and enhance the competitiveness of the companies that settle in the north of Galicia. “The idea is that it works as a boost for the industry in our area of influence, which, thanks to this position, will open up new business opportunities for the importation of products and, as a result of its activity, for export of goods from our terminal in the Outer Port”, explains the head of the Commercial and Development Department, Julio Hernández.
“The building is equipped with three front-end cameras, fully-equipped inspection rooms and offices to carry out the work of the technicians of the different ministries involved in these control processes (Health and Agriculture),” says the Head of the Exploitation Department Javier Calviño, who adds: “In addition, these facilities will allow us to perform tasks that we were already carrying out in the Inner Port even in better conditions, such as the control of products of plant origin destined for animal consumption, and will enable us to achieve authorization for other types of inspection that we now do not have, such as the importation of products of plant origin intended for human consumption”. 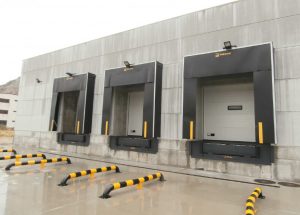