The activity in the docks of Ferrol and San Cibrao in the period from January to May of this year equals that computed in the same dates of 2018. It is expected, however, that in the coming months there will be a significant setback.

The increase in traffic of solid bulks compensates the negative evolution in the market of liquids and general godos.

The Port Authority of Ferrol-San Cibrao has fulfilled its objective so far with regard to the activity laid out in its strategic programming in 2019: to register a monthly average of one million tons of goods transported in its facilities. In fact, at this point of the year its activity practically matches the one registered in 2018, which concluded as the second best in history for the institution. However, analysts in the sector warn of a more than likely abrupt slowdown of the market in the short and medium term.

The companies that operate in the docks of Ferrol and San Cibrao moved from 1st January to 31st May 2019 a total of 5,230,700 tons of raw materials, materials and products, according to what is still provisional data. This figure is 0.03% lower than that registered in the same dates of 2018.  It is, however, an advance of 5.3 percentage points compared to the average of the last fifteen years, as shown the graph below.

Coal and bauxite lead the market

Following a year after the entry into service of the regular container line opened by the shipping company MacAndrews in the outer port of Ferrol, the traffic of this type continues to draw a sharp upward curve. Measured in tons, the increase is 2,064% compared to 2018 and, reflected in TEUs, of 1,132%.

With this balance, the Port Authority consolidates its positions among the four main institutions of its class of the North Atlantic-Cantabrian seaboard, together with those of Bilbao, Gijón and A Coruña. A status that will not be endangered despite the expected slowdown forecast for the coming months. 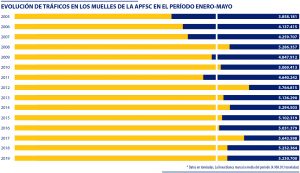