Two ecological ferries, which were recently built in Turkey, stopped in Ferrol to stock up on liquefied natural gas on their way to the Norwegian fjords, where they will have their base.

The ships have received 178 cubic meters of fuel from five tanks filled by Repsol in the terminal of Reganosa.

For the first time in its history, the port of Ferrol has hosted liquefied natural gas (LNG) refueling operations to ships that use this product as fuel, instead of fuel oil or diesel oil. The two operations were performed on Saturday and on Sunday respectively. They were carried out on the outer jetty, which is the dock of the inner dock where small and medium-sized cruise ships usually dock when they visit the city.

Liquefied natural gas is 40% cheaper than fuel oil and much more efficient from the environmental point of view. It reduces by 100% the emissions of sulfur oxide and particles, by 90% those of nitrogen oxide and in 20% those of carbon dioxide. These characteristics are of great importance since the implementation of the so-called ECA zones in northern Europe, where ships have limited emissions of gases into the atmosphere and are no longer allowed to use conventional fuels.

The ships that received the supply are the ferries Samnøy and Huftarøy, which have just been built in the Turkish shipyard – Tersan. They stopped in Ferrol on the 23rd and 24th respectively. They were on their way to the Norwegian fjords, where they will be exploited in passenger services by the Torghatten Nord shipping company. With a length of 134 meters and a width of 21m, both vessels have been designed to transport up to 545 people and up to 180 vehicles. Their propulsion systems enables them to operate in a more ecological way.

The supply operations were made by Repsol, which used five tankers (three on Saturday and two on Sunday) that had previously been filled with LNG at the Reganosa terminal.

The Samnøy received about 110 cubic meters of fuel whereas the Huftarøy was supplied with 68 cubic meters. A total of 178 cubic meters were transferred in simple, safe and clean operations.

The European Commission has laid out the objective so that ports of general interest can provide LNG supply service. This is expected to be of great importance from the next decade. However, there are very few that are capable of performing such operations in Spain at the moment. Ferrol has the advantage of having a terminal like Reganosa in its port. In addition, the Port Authority of Ferrol-San Cibrao was a pioneer in the study of measures to develop this supply, in partnership with the aforementioned company, together with Navantia as well as the operator of the container terminal of the outer port. Indeed, the container ship fleet is expected to have a large growth in the use of LNG as fuel. The number of ships propelled with this fuel is currently increasing in this segment at an annual rate of 15-20%.

According to José Manuel Vilariño, president of the Port Authority, “Ferrol is very well positioned to attract customers of this kind of supply operations.  It has LNG available in its port and is located in a strategic location, at the gates of the Baltic Sea and the North Sea. These areas have been declared ECA zones and have their gas emission rates limited by maritime transport”. Therefore, ships must change the fuel oil for another type of fuel with a low content of pollutants, such as natural gas.

In addition, Reganosa is working to convert Ferrol into a LNG hub of the Iberian northwest, thereby adapting its Mugardos facilities to the new challenge of small-scale liquefied natural gas traffic. The Parliament of Galicia itself has fully supported this project as an strategic step forward.

Vilariño has also stressed that “the implementation of LNG as a marine fuel can benefit the city– due to its traffic increase – as well as several operators in the port of Ferrol. It will also favor the consolidation of Navantia as a world reference shipyard for the gas fleet. Hence our keen interest in leading this process in the Iberian northwest. “ 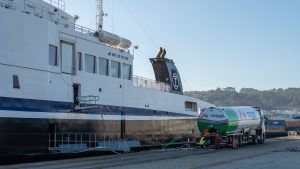 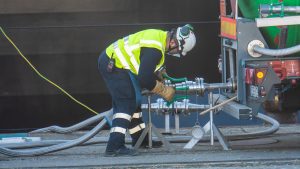