The loading and unloading operations registered in the docks of the entity in the current year so far have experienced a quick recovery and matched the figures accounted for at the same time in 2017 – a historic year.

The loading and unloading of solid bulk has increased by 2.6% while

the one of liquids has decreased by almost eight percentage points.

So far in 2018, almost a thousand ships have already docked in Ferrol and San Cibrao.

The Port Authority of Ferrol-San Cibrao has managed to close the first ten months of the year with an accumulated traffic of more than 11 million tons of goods – something that had only been achieved before in 2012 and 2017. It is, therefore, a very positive result.

The forecasts for the last two months of 2018 point to a certain deceleration of the market. This effect, however, will not prevent the institution from achieving its activity objective set in its strategic programming: favoring annual movements above 12 million dollars. Thus, it will consolidate its position among the first four port authorities in the North Atlantic-Cantabrian seaboard, together to those of Bilbao, Gijón and A Coruña.

In summary, the traffic of goods at the facilities of the Port Authority reached a volume of 11,194,698 tons in the first ten months of 2018 – 6 tenths of a percentage point more than in the same period of the previous year and 11.5% above the average of the last three decades. As shown in the evolution chart included in this press release, it is the second best record in the history of the entity, only below the one reached in 2012 (11,549,913). This comparative position will hardly be maintained at the conclusion of December.

The data collected – albeit still provisional – also reflect a positive evolution in the number of vessels serviced in the facilities of the Port Authority. In the period of January-October of this year, there were 968, compared to 929 registered in the first ten months of 2017. The vessels that passed through the docks of the institution include – among others – 527 general cargo ships, 160 liquid tanks, 153 solid bulk carriers, 36 containerships and 27 ro-ro. 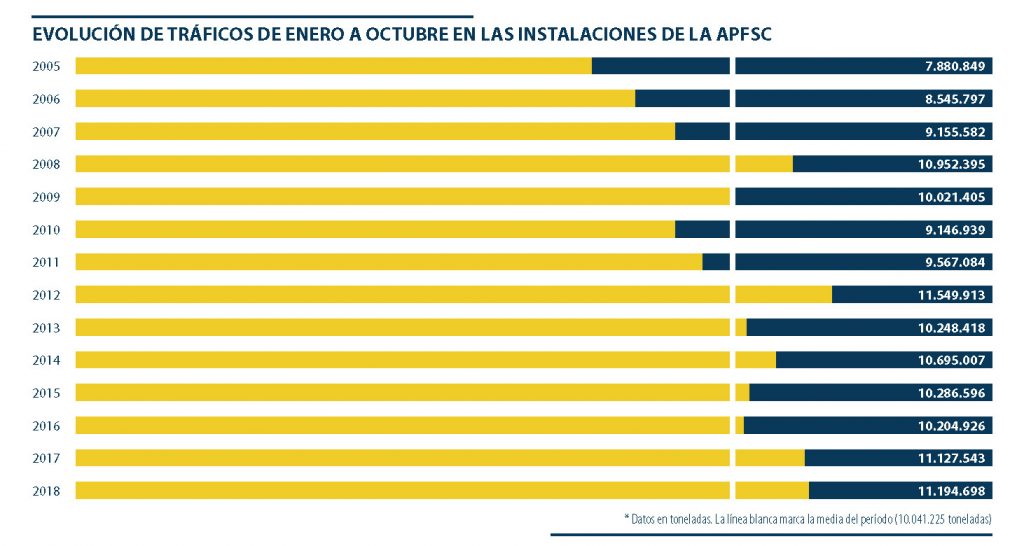