THE PORT AUTHORITY REACHES NINE MILLION TONS OF FREIGHT TRAFFIC IN THE EIGHT FIRST MONTHS OF THE YEAR.

Loading and unloading operations registered in the facilities of the institution between January and August exceeded by 0.73% compared to the same period of 2017.

The companies linked to the docks of Ferrol and San Cibrao have already received 781 vessels so far in 2018 – compared to 745 registered in the same period of the previous year.

The Port Authority of Ferrol-San Cibrao has completed the first eight months of the year with a total of freight traffic in its facilities of 9,010,563 tons. After what happened in 2012, it is the second time in the history of the institution that it manages to start September having previously exceeded the barrier of nine million tons. With this achievement, the entity has met the objective listed in its strategic programming (to record a monthly average of million tons) and has also consolidated itself among the first four port authorities in the North-Cantabrian seaboard.

So far in 2018, the Port Authority has obtained a positive balance in March, April, June and July, and negatives in January, February, May and August. The total of the period is in the black with an activity increase of 0.73% with respect to the same time period of 2017. In absolute figures, this constitutes 65,232 more tons as can be seen in the accompanying graph of its evolution. In comparison with the average of what happened in the last 14 years, the performance improvement has reached 13 percentage points.

Containerized cargo traffic does not figure in this top 10 – albeit its progression in relative terms also stands out in the statistical tables. Thanks to the entry into service of a new regular line of the shipping company MacAndrews in the outer port of Ferrol on June 2nd, the count of loaded and unloaded tons in containers reflects an amount of (17,380, 52) at this time of the year. It multiplies the one recorded in the same period of 2017 by 12.2 (1,427.76).

The data collected also reflect a positive evolution of the number of vessels which operated in the docks of Ferrol and San Cibrao. In the period from January to August of this year there were 781 – compared to 745 recorded in the first eight months of 2017. The vessels that passed though the facilities of the port authority include:  438 general cargo vessels, 129 liquid tanks, 127 solid bulk carriers, 22 ro-ro and 21 container vessels. 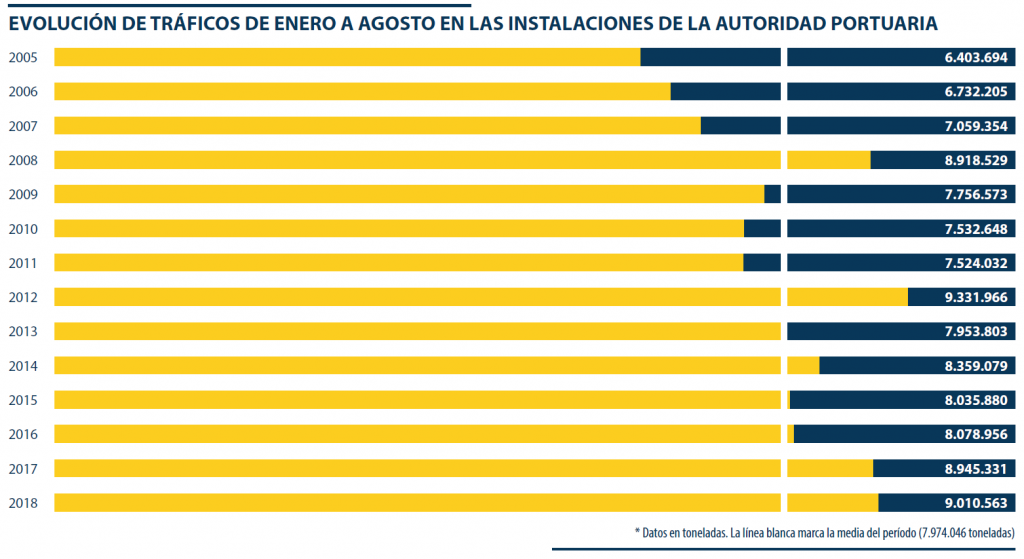