FREIGHT TRAFFIC IN THE DOCKS OF THE PORT AUTHORITY GROWS MORE THAN 2% IN THE FIRST SEVEN MONTHS OF THE YEAR.

The load movements registered in the facilities of the institution in 2018 exceed for the first time the data for 2017.
The companies that operate in the docks of Ferrol and San Cibrao moved 1.27 million tons last month – 35.4% more than in the same dates of the previous year. These figures make this July the best in the history of the entity.
Immersed in an import boom, the solid bulk market leads this increase in activity.
Ferrol, 3rd August, 2018

For the first time so far in 2018, the annual traffic balance of the Port Authority of Ferrol-San Cibrao is in the black and not in the red. The good data of activity in March, April, June and – above all – July have allowed the institution to completely overcome a bad start of year and resume the path of growth. At the moment, it is progressing at a rate of 2.2% compared to 2017.

In the global of the month, liquid bulk traffic reached 84,063 tons; that of general goods amounted to 57,852 and solid bulk – the most important- reached 1,127,065 tons. The behavior of this third market also stands out in relative terms with an increase of 51.8%

Thanks to all this, the annual balance of the Port Authority now includes a total of 7,791,108 tons – loaded and unloaded – compared to 7,621,442 tons that had been moved at this time last year. This 2.2% growth in the total of the year is the first positive balance that occurs in the accumulated total of 2018. Until now, the institution had not been able to overcome the setbacks of January (fall of 35.6% ) and February (decrease of 28.1 percentage points). 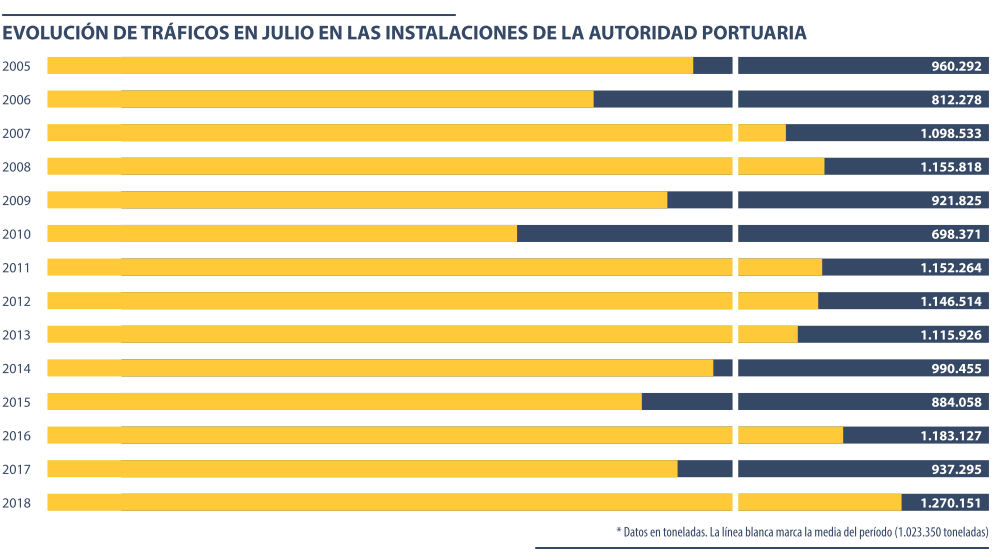 With these numbers, the Port Authority of Ferrol-San Cibrao fulfills the objectives set in its strategic programming. The institution is also consolidated among the first four of its kind in the North Atlantic-Cantabrian area – together with those of Bilbao, Gijón and A Coruña.